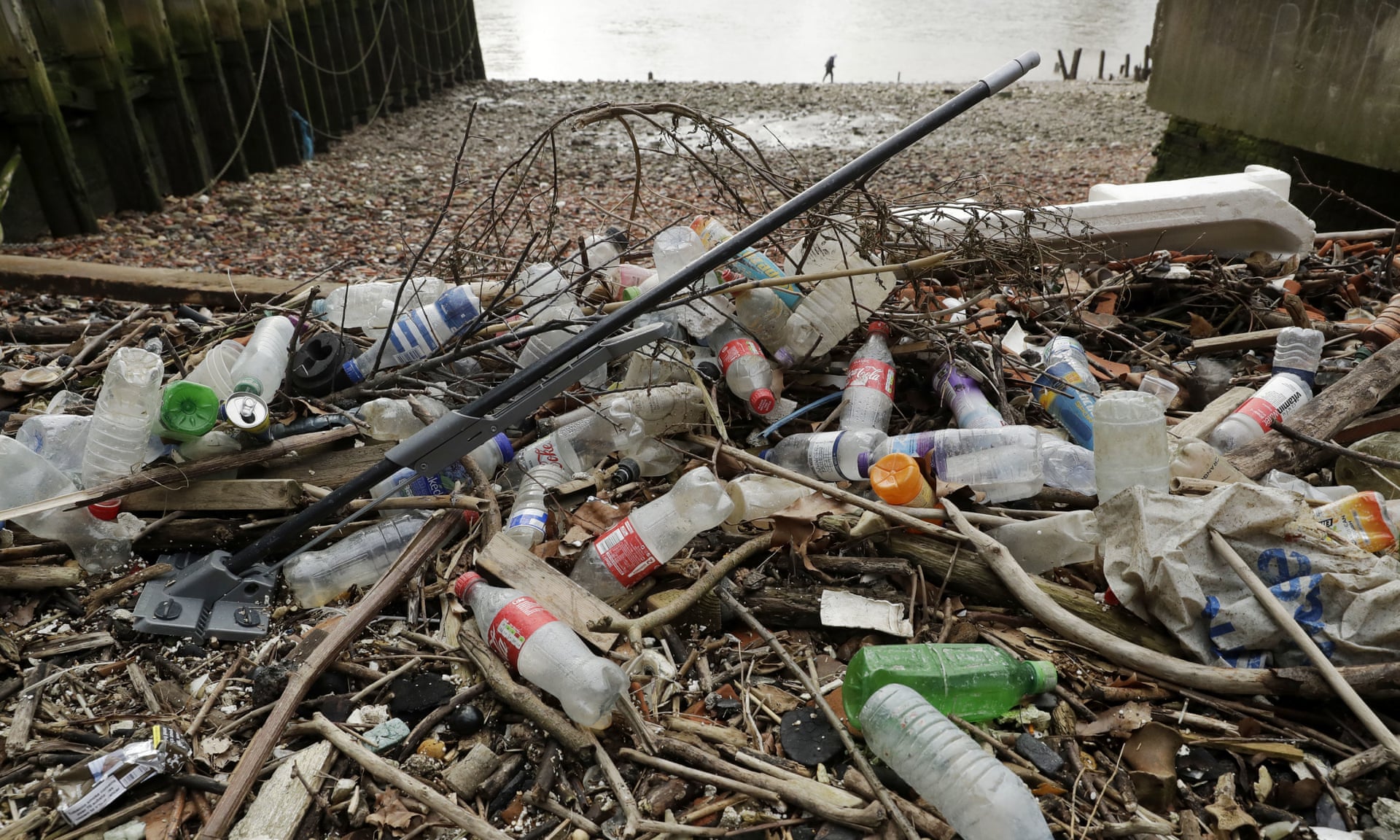 Plastic bottles, the detritus of our throwaway water and soft drinks habits, are the most prevalent form of plastic pollution in European waterways, according to a new report.

Food wrappers, including crisp and sweet packets, were the second biggest form of plastic pollution in rivers, followed by cigarette butts. All of these forms of litter can cause problems for wildlife and fish, and are hard to clean up once they have found their way into the water.

Plastic bags were found to make up only 1% of plastic rubbish in freshwater, reflecting years of efforts to reduce their use, including charges on them in the UK and many other European countries.

Consumers should be more aware of what they can do to prevent the fouling of waterways, from using cotton buds with paper sticks to binning wet wipes instead of flushing them, and bringing their own receptacles for food takeaways, according to the Plastic Rivers report from Earthwatch Europe and Plastic Oceans UK.

“The products we buy every day are contributing to the problem of ocean plastic,” said Jo Ruxton, chief executive of Plastic Oceans UK. “Our discarded plastic enters rivers from litter generated by our on-the-go lifestyle and items we flush down toilets. This throwaway approach is having much more serious consequences and the report shows really simple ways to avoid this problem and stop plastic pollution.”

Although most attention on the plastic scourge has focused on the plight of oceans, about 80% of plastic rubbish flows into them from rivers. Many experts believe that focusing on the clean-up of rivers is the best way to choke off the flow of existing rubbish into seas, while the ultimate source of the problem – our dependence on throwaway plastic products – is tackled.

The authors examined nine studies of pollution in freshwater sources across the UK and Europe, ranking types of macroplastic – large, visible pieces of plastic, as opposed to the invisible microplastics recorded in water sources from tapwater to seawater – by their prevalence.

The report also excluded fishing equipment and similar litter left by anglers, which the RSPCA recently highlighted as a major hazard to bird life, and items from farming or industry, to focus on plastic waste from consumers.

Bottles made up 14% of visible items of litter, with food wrappers at 12% and cigarette butts at 9%. Next came disposable food containers, at 6% of all items, followed by cotton-bud sticks and takeaway cups, at 5% and 4% respectively.

Sanitary items, including wet wipes, nappies and tampons, were also a major source, prompting campaigners to warn people not to flush wipes, sanitary towels or other single-use sanitary items down toilets, where they are the leading contributor to fatbergs in sewage pipes. Many wipes were until recently labelled as flushable, encouraging people into a habit of disposing of them in this way, which has turned into a hugely expensive problem for water companies.

In England alone, about 4.7bn plastic straws, 316m plastic stirrers and 1.8bn plastic-stemmed cotton buds are used each year, according to the government.

The EU parliament last year approved plans to ban single-use plastics, with items such as straws, plastic plates and cutlery banned by 2021. The UK government is still mulling how to implement plans to phase out many single-use plastic products, a target originally set for later this year but which may slip.